Road building poses unique challenges for construction companies due to environmental concerns, remote locations, weather and minimal vegetation growth in winter months, the nature of the earthmoving work itself, the sheer size of major highway construction, and the deadlines required to keep the project on schedule. These obstacles were apparent when the Rose Erosion Control Services team was contracted to assist with more than 20 miles of twinned Highway 407 just east of Toronto, Canada. Their central role was the installation of 4.5 million square meters (more than 1,100 acres) of hydromulch in rough terrain with difficult access to limit erosion of the soil slopes and minimize impacts to waterways.

The prime contractor for the project was Blackbird Constructors (comprised of Dufferin Constructors and Ferrovial Construction Canada, who partnered for this project due to the complexity and sheer size) and completed the four-year project in 2020. With a daily traffic count on Highway 407 of more than 445,000 vehicles during peak periods, it was essential to complete the job quickly in accordance with contractual schedules.

The project’s extreme-scale included massive earth stockpiles of unsuitable soils (wet silt and clay) adjacent to the construction area. These steep sided mounds were more like mini-mountains of material and were subject to erosion and runoff during heavy rain events that could impact the natural streams and threaten wildlife, including speckled and brown trout.

Conventional erosion control solutions, such as silt fences and other measures to protect the streams from runoff, proved to be ineffective because they failed due to heavy rains. After several reinstallations, more failures of the silt fence and environmental directives from Canadian regulatory agencies, Blackbird awarded Rose Erosion Control the contract to deliver an erosion control solution.

An Ounce of Prevention

The new solution was to prevent the erosion in the first place (i.e. source control), which would stop the sedimentation from occurring, rather than just block it from entering the waterways with a silt fence. Even a substantial heavy duty wire backed silt fence was not enough to prevent runoff from making it to the water and threatening the streams’ viability.

Defining the strategy and process required all stakeholders to be involved.

“A project of this size requires collaboration from everyone involved,” said Jason Rose, co-owner and president of Rose Erosion Control. “We developed a process to stop erosion with the help of Blackbird, as well as the support of Peter Etherington and his team at Fibramulch.”

Fibramulch is a hydroseed supply and hydoseeding specialist based in Concord, Ontario. They are the Finn dealer that sold the equipment and consumable supplies to Rose to complete the work.

The team determined the best solution was to use Flex Guard FRM hydromulch applied at 4,000 pounds per acre. According to a specification sheet, Flex Guard FRM is a fiber-reinforced matrix “composed of long strand, thermally processed wood fibers and proprietary crosslinked, hydro-colloid tackifiers and activators.” This material cures quickly and “forms an intimate bond with the soil surface to create a continuous, absorbent, flexible erosion resistant blanket that allows for rapid germination and accelerated plant growth.”

The goal was to apply a hydromulch that would protect the soil surface and prevent sediment from washing into the waterways. To be effective, it had to form a bond with the soil quickly to stop runoff during rainy conditions. The hydromulch provided immediate stabilization of the soil and enabled the establishment of a native grass cover, so the root systems and foliage would prevent erosion in both the short and long term.

In addition to protecting the streams and fish from sediment contamination, the seed blend selected for the hydromulch application was a mixture of native grasses and plants that make an ideal habitat for the Bobolink bird native to this part of Canada. Since some existing habitat was lost within the footprint of the new the highway, creation of equivalent replacement habitat was a regulatory requirement. The Bobolink has the status of Endangered Wildlife in Canada under the Species at Risk Act.

According to the Canada Nature Conservancy, “bobolink populations are declining because of the loss of prairies and other grasslands habitats. Their use of hayfields for nesting can make them vulnerable to accidental mortality during harvest before the end of the nesting season (generally before July 1). Habitat loss and fragmentation is the key threat for this species. Pesticide use on their wintering grounds may also be contributing to their decline.”

“By being intentional with the native seed mix applied, we were able to provide additional natural habitat for this species,” said Dale Rose, co-owner and treasurer of Rose Erosion. “We installed this seed mixture along watercourses, creek realignments, ponds, storm water ponds and natural environments during the reclamation and restoration of these areas.”

Access was a key obstacle to overcome. Using a Finn T120 HydroSeeder mounted on a Morooka crawler, Rose navigated the woods and rough terrain to gain access to the more remote areas of the job site. The tracked carrier for the hydroseeding equipment had a low ground pressure and readily navigated soft wet soils with minimal rutting. In some areas, where close access was not possible, Rose used a hydroseeder to cover the 320-foot plus spray distances required to reach the top of the dirt piles.

The combination of both mid-sized and large tank hydroseeding equipment was essential for Rose to complete the work on schedule. To keep up with the volume of hydromulching required, Rose added a FINN T330 unit.

Speed of operation is a critical factor for a project of this magnitude. Once the construction crews established the final grades and slopes for a section of the highway, it was important that soil stabilization be completed quickly since soil erosion could result in costly rework by the earthworks contractor. With the 3,000-gallon working capacity tank of the unit, one load of slurry covered nearly an acre of ground. The large deck holds six pallet spaces of materials reducing reloading time.

Two hydraulic, helical agitators rapidly mix the slurry to get the operators spraying as quickly as possible. Plus, a 6 inch-by- 3 inch centrifugal pump, also hydraulically driven, provides the power to operate from the tower or hose.

To prevent long trips to access water, Rose used storm water ponds and a water tower installed by Blackbird to fill the hydroseeders. Using water from the natural streams was not an option due to environmental concerns.

Hydroseeding proved essential for stabilizing the ground during this project. The massive volume of soils and subsoils required daily spraying of hydromulch to prevent erosion. The installation and growth of the seeds performed as intended. The construction on this segment of Highway 407 is complete as of November 2020. The hydroseeding techniques, hydromulch and seed combinations developed by Blackbird, Rose Erosion Control and Fibramulch for this project will prove invaluable for future construction projects along this highway and throughout Canada.

Material Blowers: The Most Versatile Machines in Your Fleet

Material blowers are versatile machines that can reduce material costs by up to 40% and increase productivity by up to 700%. They disperse a variety of material including mulch, soil, seed and even rocks.

Straw Blowers Can Do Much More Than Just Cover Seed 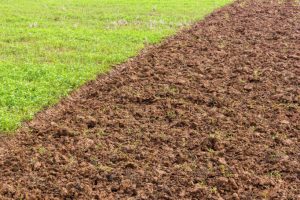 Why Ground Prep Attachments are Key to Sowing New Grass

Ground prep attachments clear terrain, loosen soil and level the field in advance of applying a hydroseeding slurry or sod for a beautiful bed of grass.

Have a question about a blog post? Ask it here.